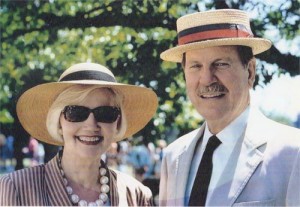 A capital campaign was launched in 2000 with a goal of $230 million.  It concluded in December 2006 on schedule and over the goal at more than $245 million.  By the end of 2007 an additional $20 million had been raised. Alumni participation in this campaign was 87% (the portion of the alumni body giving at least once during the campaign), of almost 14,000 alumni.  Members of the Board of Managers gave a total of $111 million or 45% of the total.  A new science center and a new residence hall were built.  The original building in the center of the campus was restored.  One hundred seventy new endowed scholarships were funded with $30 million in gifts.  Six new endowed professorships were established. The college’s market value endowment rose from $906 million to $1.25 billion.  The Annual Fund rose from $3.4 million to $5 million.  During the 7 year period there were over 4,800 personal visits conducted.  The cost of fund raising was just under 10 cents on the dollar for development alone and about 18 cents on the dollar including publications, alumni programs and the president’s office.

The Bicentennial Campaign was successfully completed (the amount secured increased from $60 million in August 1992 to $151 million in September 1997). The Annual Fund increased from $2.84 million in FY92 to $3.5 million in FY97.  Face to face solicitation visits increased to over 1,500 per year.  The cost of fundraising (including public relations and alumni affairs) decreased from 22 cents/dollar to 11 cents/dollar.  Included in the campaign total was a challenge grant from the NEH for expansion of the library for $575,000, a grant of $750,000 from the G.E. Foundation to revamp the engineering curriculum, three grants from the Kresge Foundation, and a $9 million grant from the F. W. Olin Foundation to build a new science building.  Also, a new theatre was built, an historic (centerpiece) building was restored, and $18.3 million was raised to remodel the library.  Market value of the endowment increased from $111 million in 1992 to $200 million in 1997.

The market value of the endowment increased from $11 million to $15 million.  Faculty salaries were increased each year with two raises given in one year.  Compensatory increases were given to most women on three occasions.  The mission statement was revised.  A strategic plan was agreed to for the 1990s.  A Planning Office was established.  A master plan for the development of the campus was finished.  A deferred maintenance inventory and a 10-year plan for addressing this were developed.  The administrative computing system, including the financial records system, was replaced.

A new graduate program in education (the first graduate program) was added.  Accreditation by the National League of Nursing was obtained for Columbia College of Nursing in Milwaukee, with which a joint nursing program was in place.  A new major in environmental science was added as was a new Honors Program.

A new residence hall and offices for student development staff and with meeting rooms in the basement was built.  A historic house was restored into a guest facility.  An office building, next to the campus, was acquired and remodeled into classrooms and offices for faculty in three departments. Land adjacent to the campus was acquired and cleared to provide more parking and a landscaped buffer.

An endowed professorship at $300,000 was obtained.  Fourteen new faculty members were recruited with 12 holding the Ph.D.  The first two African American faculty members ever employed were hired in 1991.  Twenty-two new endowed scholarships (ranging from $1,000 to $150,000) were obtained.  Ten new trustees were recruited.  All support staff and maintenance/custodial staff were added to the retirement plan for the first time.

A new Core Curriculum was introduced in 1979 and revised in 1985 and again in 1987.  An Honors International Studies program was begun in 1983.  The college received four separate six figure grants from the National Endowment for the Humanities (NEH) and the National Science Foundation (NSF).  Approximately $6 million in grants was received from 60 foundations.

Eight new endowed faculty positions were established with gifts, grants and bequests and new faculty were recruited to fill them.  Three additional positions were funded and filled with incumbent faculty.

Eight buildings were constructed after a devastating tornado in 1973 made necessary the demolition of three older buildings.  The chapel, dining hall, recreation hall and president’s house were renovated.  Four new tennis courts and a track and field facility were constructed.  A new dining hall and student union building was completed in 1982.  The former dining hall was converted to a classroom and faculty office building for the humanities departments.

The college was rated in the November 25, 1985 issue of U.S. NEWS & WORLD REPORT as the 8th best among small comprehensive colleges in the South and border states, its first appearance in this ranking.

A for-profit, tax-paying, wholly owned subsidiary business corporation was established in 1982.  The Aberdeen Development Corporation attracted national media attention for its innovative projects in establishing new sources of income for the future.

West traveled the state of Texas, visiting ministers, meeting with young people, preaching (on 89 occasions) in Presbyterian churches, attending presbytery and synod meetings.  He was acting campus minister for a year.  He taught courses in religion and completed his dissertation for the Vanderbilt degree.  He was appointed Coordinator of Research & Development and assisted in securing a joint grant of $1 million from NEH and NSF to revise the curriculum of the college and revamp teaching strategies.  He set up an implementing summer workshop and accepted appointment as Director of a new Policy Research Program.

The church hosted a Head Start class in its building and organized an art class taught by the local high school art teacher, in its basement and began sponsoring a Girl Scout troop.  The church library was enlarged and the senior high fellowship was revived.  The educational wing of the building was remodeled and the manse was enlarged. I preached 143 sermons, baptized 22 persons, conducted 18 weddings and 12 funerals.  I began work on a doctoral degree program in theology at Vanderbilt.  For one semester I was an interim teacher of mathematics and physics at Smyrna High School.  In the summer of 1967 I exchanged pastorates with a Presbyterian minister in Belfast, Northern Ireland.  I went to Memphis to march with the striking garbage workers led by Dr. King and again for the demonstration after his assassination.  I attended the General Assemblies of the National Council of Churches in Miami and Philadelphia in 1965 and 1967.